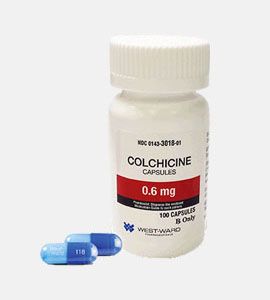 There are 24 users looking at this product right now

Colchicine is an alkaloid drug obtained from the autumn crocus plant (colchicum autumnale), which is used to treat or prevent gout attacks and FMF ( familial medditerannean fever). It is by no means a painkiller and should not be used to treat other causes of pain. Colchicine is classified as an anti-gout agent, which works by decreasing the natural process of swelling and lessening the accumulation of uric acid crystals that result in pain in the affected joints.

Each capsule consists of 0.6mg Colchicine and inactive ingredients listed below:

The drug should be stored 20-25°C and protected from sunlight and moisture.

Colchicine is effective in treating gout due to its capability to block neutrophil-mediated inflammatory responses caused by monosodium urate crystals. The drug disrupts the polymerization of beta-tubulin into microtubules, therefore inhibiting the activation, degranulation and migration of neutrophils into the sites of infection.

The mean Cmax of the drug when given to healthy adults is 3ng/mL after single 0.6mg dose oral administration. Cytochrome P450 3A4 metabolises 16% of colchicine to 2- and 3- demethyl colchicine. The drug distribution is known to range between 5 to 8 L/kg.

Before taking this drug, you should consult your doctor for an adjusted optimal dosage.

If you are prescribed colchicine to treat gout flares, the recommended dose will be 1.2 mg immediately after the attack, followed by 0.6mg an hour later. The maximum dose that can be taken during a one hour period is 1.8mg.

If you are being treated for FMF, it is best to take 1.2mg to 2.4mg daily. It is up to you to take the dose once daily or to divide into portions throughout the day.

The drug is administered orally, with or without food.

It is important to continue taking this medication even after you are feeling well. Do not stop taking colchicine unless you talk to your doctor.

Immediately consult your doctor if any of the side effects listed above become acute and unbearable.

●      Before starting on this medication, tell your doctor if you have had any kidney or liver problems

●      Limit the consumption of alcoholic beverages while taking this drug

●      Colchicine can result in oligospermia, which can affect the ability to father a child

●      Unless strongly needed, it is not advised to take this drug during pregnancy or breast-feeding period